Don’t Burn Down the House

Our country has endured an unusual past few months. On a national level the scale of the recent civil unrest is unprecedented since at least the late 1960’s Vietnam protests and perhaps before. This followed a nearly two month lockdown period when the country attempted to thwart the spread of a pandemic. The lockdown has caused an economic contraction that is unprecedented since the great depression. For over 200 years periods of tumult in the United States have led to better days when previous highs were eclipsed in markets, the economy and even social justice, in our opinion. We expect the same will happen this time. However, the lockdown and unrest, which are likely somewhat related, will have a lasting impact in certain areas. Which areas and what that impact will be is hard to pinpoint at this time, but we have some educated guesses. We believe there will be secular changes that benefit certain investments and create losers in others. We are working hard to identify the winners. Residential housing through investments in related companies like home builders, title insurance and other mortgage related services may be one. In this Risk on Risk Off we will focus on the home builders.

Based on the extraordinary past several months, it would appear that residential housing, particularly single family homes, should be a relative beneficiary of change. Housing was the epicenter of the 2008 financial crisis. Decades of ever rising home prices coupled with securities that were tied to mortgages backed by those ever-rising home prices combined into an epic financial debacle when the prices finally buckled as they usually do. Average nationwide home prices declined 35% from peak to trough starting in the summer of 2006 and bottoming in early 2012. 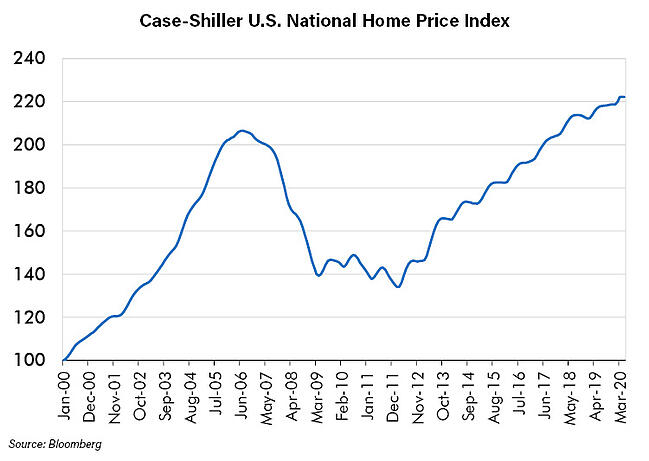 Since then, they have recovered and exceeded prior peaks. As illustrated below, relative to the S&P 500, stocks of homebuilders slumped dramatically after peaking a full year before home prices. Since the trough, the home builder equities have performed well and have outperformed the S&P 500. However, the outperformance was not nearly as much as it was last cycle. In fact, last cycle the Home builders outperformed the S&P 500 by over 700%. This cycle it has only been 70% despite a similarly strong price move by home prices. 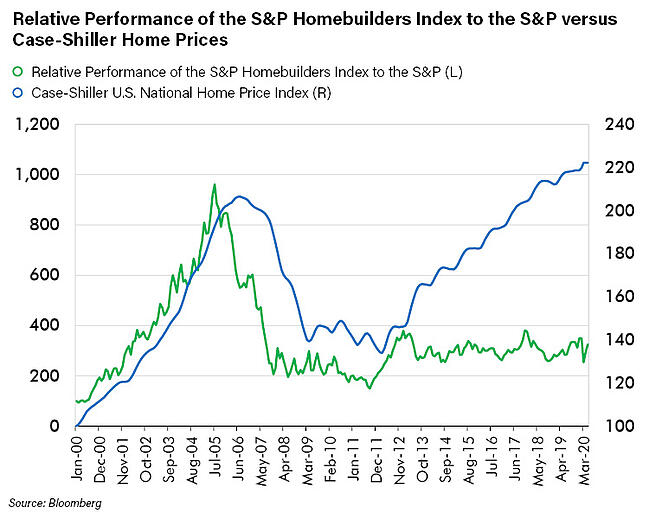 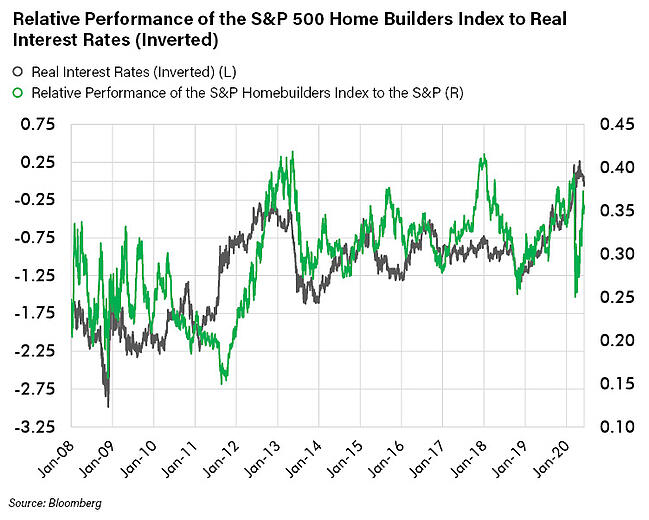 As regular readers of Risk on Risk Off or other of our writings know, we expect interest rates to continue to trend down in the near future. So, we are always on the lookout for investments that might benefit in that scenario. As mortgage rates decline, we would expect house prices to be supported despite recessionary conditions. This might be particularly true if interest rates decline into negative territory. Although mortgage rates may not become negative (although they are in Denmark), the prospect of negative rates on bank deposits will encourage savers to find alternatives to leaving money in a bank. Residential real estate may be one such asset class that benefits.

Another encouraging thing about home builders is that their leadership of the stock market ceased in 2005 and has been absent for nearly 15 years. During that time, as mentioned, home prices have recovered and exceeded the prior peak but housing starts are stuck well below their prior peak. This is not only in spite of high prices but also in spite of household formations that are exceeding the 2003-2005 peak. 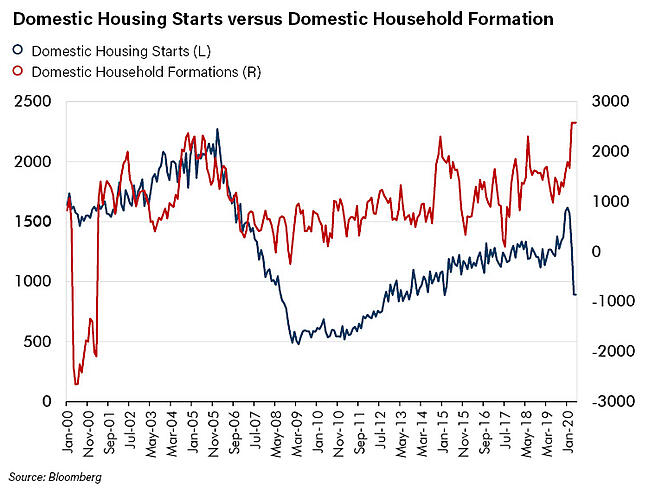 Given low interest rates and the above-illustrated data, we believe that housing prices should remain strong and starts should trend up which should support home builder fundamentals.

The last several months have been very unusual in the lives of most Americans. Almost no one alive today has lived through the response to a Pandemic as life altering as this one has been. Very few remember a time of such widespread social unrest. Many things are changing because of this. Many assets may be at risk because of it. Rules are changing, expectations are changing and people and companies are doing business differently. It should not be in dispute that what has happened has impacted urban city dwellers more than those in the suburbs and rural areas. COVID-19 was much more severe in New York City, our most densely populated city, than elsewhere in the country. Sparsely populated areas were impacted far less in general. The same can be said of the domestic unrest of the past several days. Urban centers have seen far more disruption from looting and other criminal activity than elsewhere.

As a consequence of this, many white collar workers have been working remotely and for the first time regularly using technology they had not before. Meetings over applications like Zoom and Webex have become commonplace. Many online activities such as doctor’s visits, academic courses and workout sessions have suddenly become routine. Many people have learned they can do much more from a remote location than they previously thought.

The combination of the desire to avoid urban areas and apartment buildings and the ability to function away from them may be a secular change that has been thrust upon us. Anecdotally that appears to the case. In the suburbs of New York there is the widespread belief that single family home real estate demand has picked up substantially – even despite the economic contraction. This would be very positive for home builders who are heavily leveraged to new single family developments in non-urban areas.

WHICH HOME BUILDERS TO OWN?

As usual, valuation is important. The homebuilder stocks are not, even relative to the market, as dirt cheap as they were at the bottom of the cycle in 2011. However, compared to the peak several are reasonably priced. This is particularly true if one contemplates the scenario above which should be supportive of good financial results for a long time. It is also particularly true because they have not rebounded from the lows of the COVID crisis nearly as much as the market and nearly as much as real interest rates have declined. On an individual basis, given current uncertainties, we seek the companies who have the lowest cost structure and are prudent about deploying capital. We are acutely uncomfortable with excessive leverage in this industry especially when it is used to speculate on raw land and other activities that may not turn over capital for a very long time. We have found companies that fit our criteria nicely.

Our world is rapidly changing. Its over-indebtedness is getting larger and economic growth has contracted substantially. We are in the midst of a very tough economic environment. Surprisingly, equity markets are very close to all time highs that appeared to us to be expensive even when economic conditions were solid. Uncertainty reigns supreme now and substantial caution is warranted. However, there are some things we have high conviction in. One is that interest rates are likely to continue trending down. Another is that we believe secular changes are taking place that will create some winners. We are comfortable confronting the uncertainty with investments that should benefit from lower interest rates. If those investments might also benefit from the new realities being created then all the better. Single family housing through positions in home builder equities may be one such investment. 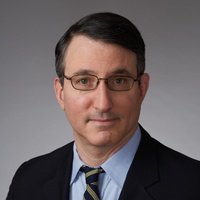